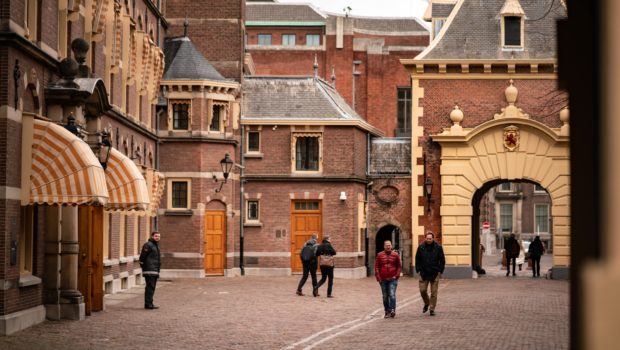 During a parliamentary debate on NATO on 15 June, Jasper van Dijk (SP) introduced three motions related to nuclear weapons. While supported by many parties, the numbers weren’t there and all three motions were defeated.

The first motion, “that nuclear weapons must be eliminated from the world” offered parties an opportunity to choose whether or not they support global disarmament. Unsurprisingly, far right parties VVD (People’s Party for Freedom and Democracy), PVV (Party for Freedom) and FvD (Forum for Democracy) are not in favour of nuclear disarmament (or democracy, considering the overwhelming majority of Dutch citizens support for disarmament). The motion gained support from PvDA (Labour), SP (Socialist Party), GroenLinks (Green-Left), PvdD (Party for the Animals), CU (Christian Union), Denk, Volt, BIJ1 and Den Haan. However, the Christian Democrats (CDA), Van Haga group, JA21, SGP and BBB joined the far right parties in their support for weapons of mass destruction.

The third motion recommended that the Netherlands join the first Meeting of States Parties of the Treaty on the Prohibition of Nuclear Weapons as an observer, as The Netherlands has not (yet) signed this treaty. Being present at the UN meeting as an observer, possibly together with other NATO countries that participate in nuclear sharing, could be a first step towards NATO members signing the treaty. Unfortunately, this motion was also rejected. This time the SGP, together with PvdA, SP, GroenLinks, PvdD, DENK and BIJ1, voted in favor of the motion, but VVD, D66, PVV, CDA, CU, FvD, Van Haga group, JA21, Volt, BBB and the Den Haan faction were still in the majority. Some however indicated that they did not want to pre-judge any decisions made by the new government once it is formed, as several political parties in government negotiations have language supporting the TPNW in their party programmes.

Negotiations on a new government coalition continue. Since the March elections, several combinations have been tried, with no success yet. The latest attempt – a four-party bloc with VVD, CDA, JA21 and Volt is now unlikely as recent party resignations mean it no longer creates the 76 seat majority needed. There are some chances of a restart with the parties involved in the previous government- VVD, CDA, D66, CU, but ChristenUnie (CU) has indicated that it’s not too keen on this idea.

In negotiations – whether for national government or international treaty – nothing is agreed until everything is agreed. At this point, there is only speculation. Will the parties get together leaving out the Christian Democrats? Would the Christian Union be willing to continually seek compromises on medical-ethical issues with the Democrats (D66) for an entire government? Will the recent controversies surrounding the Christian Democrats cause that party to rethink its priorities (and maybe take a position on nuclear disarmament?) Nothing is sure until everything is sure.