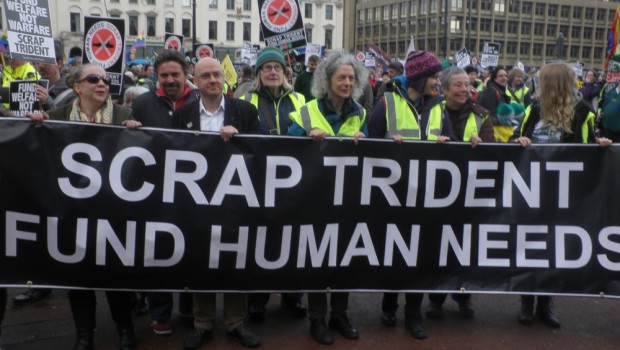 Thousands of people were rallying on the streets of Glasgow to scrap Trident, No Nukes Team Member Krista van Velzen being one of them. Below you’ll find a short report and some nice pictures of the demonstration, click the link underneath the one photo you see.

Trident, the float of British submarines loaded with nuclear weapons is based close to Glasgow in Faslane. David Cameron is hoping to replace the current nukes with the so called son of Trident. Purchase and maintenance will cost up to 100 billion pounds, the Campaign for Nuclear Disarmament has estimated. Reason enough to hit the streets I’d say!

Next year Scotland will organise a referendum on the question whether people want Scotland to be independent. As first minister Salmond has already announced banning nukes from Scottish soil and water will be in the future constitution, this will be the first time people can actually vote whether they want their country to be a nuclear weapon state!! Bridging the democratic gap, Scotland might lead the way for us!!!

My speech at the demonstration was welcomed with a lot of applause, especially when I mentioned the fact that we  need to keep on putting pressure on the British governemnt as the UK refused to join 127 countries in Oslo talking about the catastrophic consequences of the use of nukes. Yes to spending 100 billion pounds on weapons of mass destruction and not wanting to address the consequences, a bit awkward, right??!

Tomorrow I will help out giving non violence training to the people that will block the Faslane base upcoming monday on the Global Day against military expenditure. I hope we will be many!!

Photo’s you’ll find in the Scrap Trident album below.