The global day of action on military spending is an opportunity for people worldwide to demand a shift in financial priorities. On this day, 13 April, the Stockholm International Peace Research Institute will release its annual report on global military expenditures. The day of action is to call for a shift from disproportionate military spending to funding real human security needs. Most actions are focused on government spending. But there is another side to the money around weapons, and that comes from investments made by financial institutions worldwide.

Research coordinated by PAX shows there is more than US$ 402 billion invested in nuclear weapons producers, and US$ 27 billion invested in Cluster Munitions producers. The research period for nuclear weapons- is from January 2011- August 2014, and for Cluster Munitions from June 2011 – September 2014. These are significant investments from the private sector into companies involved in the production of key components for indiscriminate weapons. This makes the issue of financing the production of indiscriminate weapons a personal one.

No one wants to know that their money is connected with the production of weapons that are either illegal (like cluster munitions) or should be (like nuclear weapons). Everyone has an opportunity to do something about it.

On this Global Day of Action, we can demand that our money not fill the accounts of these weapons producers, that our financial institutions put in place airtight policies to prevent any investment in indiscriminate weapons and that they divest now.

To find out if your financial institution invests in nuclear weapons producers see: www.dontbankonthebomb.com

And contact your financial institution say now is the time to Stop Banking on the Bomb.

Send them a tweet to say that it’s time to stop financing #nuclearweapons producers! #divest #goodbyenukes

to Bank of America

to Royal Bank of Canada

to Royal Bank of Scotland 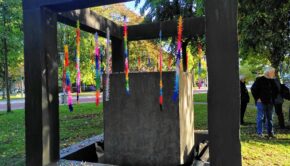