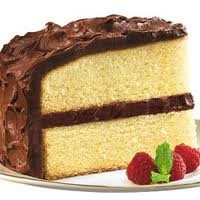 Uranium oxide or a delicacy to bake on a cold, dark Sunday afternoon: yellowcake has two very different faces.

As the holidays are fast approaching, as the weather gets colder and colder, the sky darker and darker (at least here in the northern hemisphere), I’m spending my Sunday afternoons in the best winter way- baking and learning more about nuclear technology.

Yellow-cake means different things to different people. With discussions continuinging about Iran’s nuclear programme, and with a recent article about Bill Gates investing in new nuclear technology I thought it was time to write a bit about yellow-cake. And to share the recipe that my mom uses for my (favourite) birthday cake (see below).

Uranium Mining
Uranium mines are found worldwide. Over half of the world’s production of uranium from mines is in Canada and Australia. Uranium is also mined in China, the Czech Republic, France, Gabon, India, Kazakhstan, Namibia, Niger, Russia, South Africa, Spain, Ukraine, the United States, and Uzbekistan. After mining the uranium mineral is refined to uranium oxide, called yellowcake. The yellowcake then needs to be enriched to be usable in nucelar reactors or nuclear weapons.

What IS Yellowcake?
Yellowcake has two forms of uranium: uranium-235 and uranium-238. Uranium-235 fissions (splits) readily. Its concentration in yellowcake is only 0.7%. For the common nuclear reactor (light-water) yellowcake is enriched to 3% uranium-235 (low-enriched). To make bomb-grade fuel yellowcake is enriched to 90% (highly-enriched). How far countries want to enrich uranium is usually seen as a clue as to whether they want to develop nucelar weapons capability. Given that there is a global surplus of highly enriched uranium leftover from the cold war, one would think that it is much more logical to use up the cold-war leftovers rather than create new potential sources of contamination.

Every step of the uranium processing leaves behind some kind of wastes- when it comes from the ground and is turned to yellowcake, you wind up with tailings and other waste materials. When you are going through the enrichment process you wind up with uranium that is not enriched to usable levels, called ‘depleted uranium’ (for more information on Depleted Uranium, check out my colleague Wim’s work here).

Things to read while your yellowcake is in the oven
There are a lot of resources out there where you can get more information about these processes. In fact, you can read through at least the Federation of American Scientists and Reaching Critical Will’s information, while you’re waiting for your own yellowcake to bake.

The recipe
On that note, here’s the yellowcake recipe that my mom used to make for my birthday (with thanks to Betty Crocker).

Beat butter, sugar, baking powder, and vanilla in a large bowl with mixer on high 3 minutes or until fluffy.

Add eggs, 1 at a time, beating well after each.

On low speed, beat in flour in 3 additions alternately with milk in 2 additions, just until blended, scraping sides of bowl as needed.

Bake at 350F degrees (170C) for 35 minutes or until toothpick inserted in center comes out clean.

Cool in pan on a wire rack for 10 minutes.

(For frosting, come back another time, or check here).