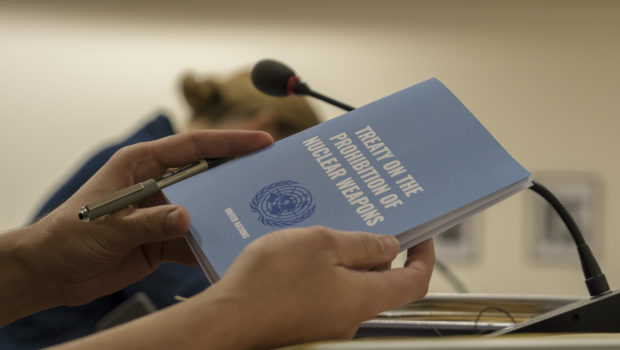 In 90 days, the only international treaty making all nuclear weapons illegal will officially become law. The final instruments of ratification needed to trigger entry into force of the Treaty on the Prohibition of Nuclear weapons have been deposited at the UN. The countdown begins now.

Nuclear weapons are the most destructive, inhumane and indiscriminate weapons of mass murder ever created, and until now were the only weapon of mass destruction not clearly prohibited by international law. The International Committee of the Red Cross has said any use of nuclear weapons would violate the laws of war.

Although the number of nuclear weapons in global stockpiles is declining , the risk of their use, by accident or design, is growing.

What is in the Treaty?

The Treaty on the Prohibition of Nuclear Weapons was negotiated and adopted in 2017. It makes it illegal for the countries that join to engage in any activities related to nuclear weapons. It bans the use, development, testing, production, manufacturing, acquiring, possession, stockpiling, transferring, receiving, threatening to use, stationing, installation, or deploying of nuclear weapons, as well as any assistance with those acts.

The treaty requires a verifiable, time-bound, transparent, and irreversible destruction of nuclear weapons and programs and requires the maintenance of existing safeguards. Once a country joins the TPNW, it allows the safeguards regime to become stronger over time but prohibits any weakening of the regime.

Why does this treaty matter?

Countries that don’t join the treaty will not be legally bound by it, but the anti-nuclear weapon norm strengthened by the TPNW’s entry into force can still shape their behaviour and build pressure to change policy and practice around nuclear weapons.

75 years after nuclear weapons were invented and used, there is now no question that they are illegal under international law. Click To Tweet

This is the only treaty that prohibits nuclear weapons. This creates a new legal environment in which countries, like the Netherlands will have to operate.

Due in part to this mounting political and normative pressure, countries opposing a treaty upon its adoption have joined treaties after their entry into force. Given the overwhelming public support for the TPNW in many countries that have not yet joined it (79% of Australians, 79% of Swedes, 78% of Norwegians, 75% of Japanese, 84% of Finns, 70% of Italians, 68% of Germans, 67% of French, 64% of Belgians, 62% of Dutch and 64.7% of Americans) these countries may also join the TPNW in the coming years.