Escalations in North East Asia are (again) raising the possibility of new conflict, potentially including nuclear weapons. This post is being kept updated and includes background information and some food for thought for what could be done. 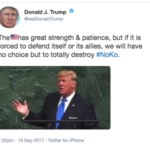 The North Korean foreign minister Ri Yong-ho held a press conference on Monday 25 September suggesting that a recent tweet from Donald Trump should be considered a declaration of war. He went on to say “Since the United States declared war on our country, we will have every right to make counter-measures, including the right to shoot down United States strategic bombers even when they are not yet inside the airspace border of our country.”

US President Donald Trump used his first speech on 19 September to the UN General Assembly to threaten to “totally destroy”  North Korea. This escalatory rhetoric is considered by some to be a violation of the UN Charter.

North Korea’s Kim Jong Un responded, calling Trump a “dotard” and saying “A frightened dog barks louder.”  going on to say that he “will surely and definitely tame the mentally deranged US dotard with fire.”  There was also suggestion that this rhetorical back and forth might lead to the test of a hydrogen bomb over or in the pacific. 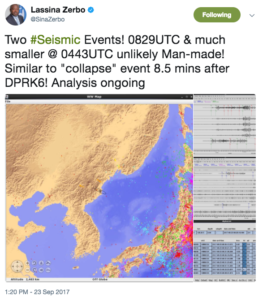 On Sunday, 3 September, North Korea conducted it’s sixth nuclear weapons test. It was the largest test so far, some are estimating that it could have been nearly eight times bigger than the bomb dropped on Hiroshima.  This test is another point in the repeated escalation cycle between North Korea and others. According to Alex Wellerstein’s nukemap, if such a bomb were detonated over Seoul, it would destroy at least 44 hospitals, 138 schools, and would cause nearly half a million (500,000) people to die while injuring up to two million (2,000,000) more. It is also a demonstration of North Korean capabilities, and combined with recent missile tests, appears designed to change the calculus and force a new round of (hopefully diplomatic) engagement. 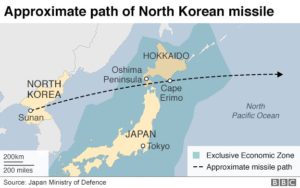 In the early morning of August 29, 2017,  the government of North Korea (Democratic People’s Republic of Korea) launched a missile over Japan. This is the third time since 1998 that the North Koreans have conducted a test that flew over Japan, the 18th missile test this year, and one of more than 80 missile tests since Kim Jong-un came to power in 2011.

In response, Japan’s prime minister Abe requested a meeting of the UN Security Council. The Security Council unanimously condemned North Korea’s firing of a ballistic missile over Japan, said it was of “vital importance” that North Korea take immediate, concrete actions to reduce tensions and called on all states to implement UN sanctions on North Korea. The council also expressed “its commitment to a peaceful, diplomatic and political solution”.

For the last two weeks, the US has also been conducting joint military operations in the region with Japan. 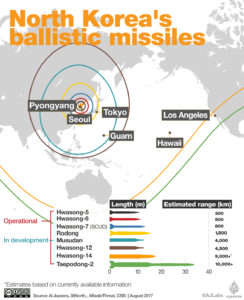 Missiles: There is a lot written about the North Korean missile capability (and also a lot of names ascribed to those different missiles). Reports in the NY Times show that the most recent Inter Continental Ballistic Missile (ICBM) tests conducted by North Korea demonstrate that the most recent missile developments might have the capability to get a rocket to hit targets up to 10,000 KM away by the end of this year.

Nuclear weapons: The challenge with putting a nuclear weapons onto a missile is getting the nuclear warhead small enough to fit- and still be workable. After conducting six nuclear weapons tests since 2006, some suggest that North Korea now has about the capability of a Hiroshima sized bomb (which killed 70,000 people upon detonation, and another hundred+ thousand in the years afterward). The most recent nuclear test was estimated to be about eight times the Hiroshima bomb. According to Alex Wellerstein’s nukemap, if such a bomb were detonated over Seoul, it would destroy at least 44 hospitals, 138 schools, and would cause nearly half a million (500,000) people to die while injuring up to two million (2,000,000) more.

The current North Korean leader, like his predecessors is also ruthless and has no qualms about his own population starving to death, committing gross human rights violations and more. There is a constant stream of refugees fleeing into South Korea and China.

It is, however, important to remember that when it comes down to external policies, Kim Jong-un is acting as he says he’s going to act. Therefore he cannot be dismissed as irrational or unpredictable. But that also does not mean that the cold war style of nuclear deterrence is guaranteed to work. Above all, one wrong move or accident and the predictable response is a likely destruction of Seoul.

What is the international community currently doing?

Sanctions have been in place since North Korea conducted its first nuclear weapons tests in 2006. The sanctions regime (and UN Sanctions committee) have blocked arms transfers and travels and frozen assets for key individuals.

The six party talks (between China, the Koreas, the US, Japan and Russia) that began in 2003, have been suspended since 2009. China has continued to call from their resumption, as recently as February 2017. However, there has been little progress towards continuing the six-party talks recently.

What should the international community do?

To immediately de-escalate the situation, a draw down of US forces stationed in the region would have a powerful impact. It is likely that only after some kind of drawdown and projection of calm and cautious statement will any party be willing to engage in talks. States need to negotiate a diplomatic solution to the situation that includes the possibility of normalized relations (including trade relations and a timeline for sanctions relief in exchange for a halt to indigenous production of nuclear weapons grade materials and a slowdown of the missile programme). The experience of negotiating the Joint Comprehensive Programme of Action between the EU 3 + 3 provides a lesson learned and one possible ideal pathway to consider. However, the JCPOA halted the Iranian nuclear programme and it is too late to do that with North Korea. Instead, there needs to be an acknowledgement that the window to prevent North Korean acquisition of nuclear weapons may have actually ended. In which case, a pathway towards containment or constructive engagement with an eye to denuclearization of the Korean peninsula, a final armistice agreement between US, South Korea & North Korea, and normalized (or at least partially resumed) relations between all parties needs to be considered.

No one wants to think that the international community failed to prevent the proliferation of nuclear weapons, but as long as there are countries with nuclear weapons, other countries will try to acquire them too. The risks of any use of nuclear weapons are growing, and this type of escalation- through rhetoric but also followed by specific military activities is extremely dangerous. UN Agencies have found that there is no humanitarian response possible, and the best cure is prevention of any use whatsoever.

North Korea’s actions are an example of the continued assertion by a minority that nuclear weapons have some perceived value. This is another reason why the international community has recently agreed to comprehensively prohibit the use, production, testing and stockpiling of nuclear weapons. No one should be legally allowed to threaten cities and countries with the extreme devastation that nuclear weapons are designed to cause, and its why states will sign the Treaty on the Prohibition of Nuclear Weapons starting 20 September 2017. The treaty is a clear signal to the nine countries with nuclear weapons and their allies that the rest of the world considers their behaviour not only immoral, but also illegal. As former UN Secretary General Ban Ki Moon so eloquently stated “there are no right hands for the wrong weapons”.  This cycle of escalate, respond, sanction, test, escalate, respond, sanction, test will only end when States are serious about delegitimizing all nuclear weapons- and the way to do that is to sign and ratify the ban treaty.