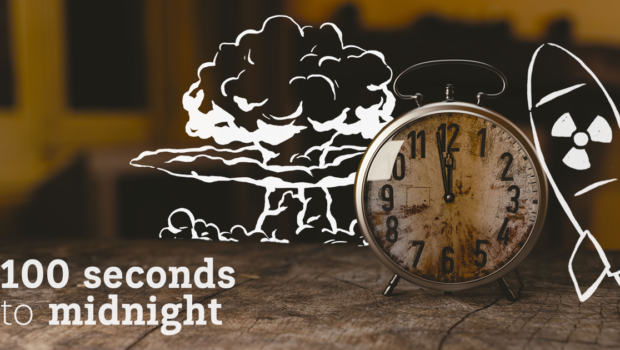 It is STILL 100 Seconds to midnite

The Bulletin of the Atomic Scientists just announced the Doomsday Clock– 100 seconds til the end. This metric remains unchanged since 2020, reflecting the widespread risks associated with biological threats. This metric, measuring in seconds instead of minutes, reflects an urgency and need for action to reduce human caused threats to public health and the planet.

The threat of doomsday from nuclear weapons is at the core of the Bulletin’s clock warnings. PAX works to reduce nuclear dangers in a number of ways, including by involving Dutch citizens in shifting the government away from policies that provide legitimacy for the continued possession (and modernisation) of nuclear weapons. PAX continues to call on the Dutch government to join the Treaty on the Prohibition of Nuclear Weapons, and end the stationing of US nuclear bombs in the Netherlands.

The announcement by the Bulletin reflects just how urgent it is to end existential threats, including the threat of weapons of mass destruction and focus our efforts on solving the complicated interlinked crises of climate and biosecurity.

Recognizing the dangers of continued nuclear modernisation, launch on warning plans, and the deadly risk posed by giving one person authority to launch nuclear arsenals, the Bulletin continued it’s reflection on global dangers of nuclear arms. However, the recognition that the majority of countries around the world support a comprehensive ban on all nuclear weapons, as made in the presentation by President Sirleaf, reaffirmed how the credibility of the nuclear armed states will continue to be undermined as long as they fail to make progress on their disarmament.

All efforts to move away from Doomsday will require concentrated and consistent efforts by a wide variety of stakeholders. PAX is fortunate to have excellent partners in this effort- from the 2017 Nobel Peace Prize winning International Campaign to Abolish Nuclear weapons to the Dutch Fair Finance Guide–  PAX works to prevent humanitarian harm and build a lasting and sustainable peace.

Netherlands attends 1st Meeting of States Parties to the TPNW →