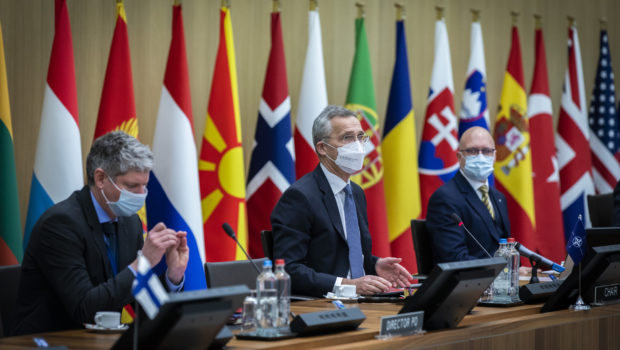 Late March saw the most recent meeting of NATO’s member states’ foreign ministers and Secretary-General Stoltenberg. SG Stoltenberg briefed the press on different proposals lying on the table regarding common funding and burden-sharing among the allies in Europe and North America. Among other conversations, ministers discussed the extension of the New START Treaty, arms control, and the continued use of  nuclear weapons as part of NATO strategy.

NATO’s justification for encouraging the continued possession of nuclear weapons is reflected in the answers given during last March’s press conferences. In sum, collective defense, nuclear burden-sharing, and taking account of new realities validate NATO’s willingness to endanger the planet and the security of current and future generations . Kjølv Egeland’s recent article on nuclear burden-sharing shows the advancement from underlining the role of the nuclear weapon-possessing states inside the Alliance to what Egeland calls the ‘collectivization’ and ‘pulverization’ of responsibility. There are several adverse side-effects that stem from this development, including increased legitimacy and political cover for nuclear armed states force structures and declaratory policies that would otherwise have fallen under more scrutiny in the framework of the Treaty on the Non-proliferation of Nuclear Weapons (NPT).

The British Breaching the NPT

Similar to the reasoning alluded to in Egeland’s article, SG Stoltenberg justified the recent British move to increase the cap on their nuclear stockpile. Citing an increased threat perception due to developments in mainly Russia and China, the British plans to increase warhead numbers and decrease transparency in the recent British Integrated Review, was justified by Stoltenberg. This breach of the Non-proliferation treaty, which should prevent global increases in nuclear weapons, was naturally not addressed. It stands in stark contrast to defensive arguments of “NATO being at the forefront of arms control for decades” and the Alliance’s goal of a world without nuclear weapons. Beyond the justifications, SG Stoltenberg even admitted to welcoming the increased defense investments by the UK.

The continued messaging that nuclear weapons are necessary for security, even for the most heavily armed alliance on the planet, suggests a turn away from the non-proliferation focus of the recent past. Though the pointing of fingers and condemning of other’s actions are not out of place with the threat of new nuclear weapons types and capabilities by all nuclear armed countries, it falls on deaf ears when one is taking steps in the same direction. This Cold War remnant of the vicious cycle that the ‘nuclear security dilemma’ entails, increasing and modernizing weaponry to overcome insecurity and external threats, which reinforces opponents to do the same, does not make the world a safer place. On the contrary, a world with nuclear weapons brings threats of indiscriminate destruction of the whole of humanity.