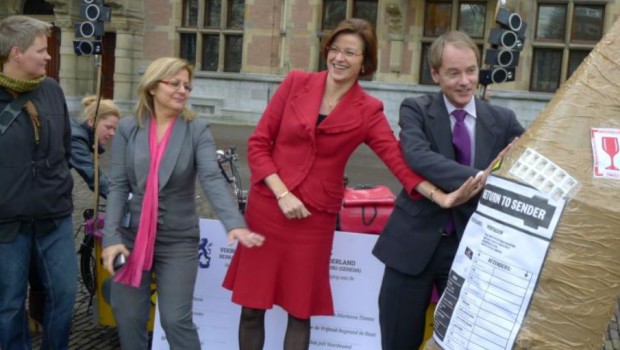 Today, there was a hearing in the Dutch Parliamentary subcommittee on defence issues. Attended by a number of parties- CDA, VVD, PvDA and SP, the committee heard from Hans Kristensen (Federation of American Scientists), Peter Herby (Norwegian Red Cross), Lars Pohlmeier (International Physicians for the Prevention of Nuclear War) and me, IKV Pax Christi’s own Susi Snyder.

I ran out of time- having too much to say to the committee overall- but am including my full remarks below.  More of what other speakers said will be available soon

Ladies and Gentleman,
Thank you for the opportunity to speak here today. It is important for the Netherlands to recognise that it has a role to play in the creation and maintenance of a nuclear weapons free world. This hearing offers a significant opportunity for the Parliament to further engage in these efforts, to strengthen and reinforce government action, and to continue the useful trend towards the democratisation of security.

The Netherlands has committed, both through national policy statements and through alliance doctrines to create the conditions for a world free of nuclear weapons.

In 2010, this pledge was further detailed in the consensus outcome agreement of the nuclear Non Proliferation Review Conference- an elaborated 64 point action plan on disarmament and non-proliferation.

As a middle power, the Dutch government recognises that it has a role to play, as written in the 24 October 2013 Policy Letter on nuclear disarmament and non-proliferation.

I will use my time here now to talk about the current approaches elaborated in the Dutch policy letter, the connection with international policy statements and agreements, and will make some recommendations towards strengthening the impact and effectiveness of the Dutch approach.

Now let’s look at some of the current efforts outlined in the October policy statement.

NPDI
The Non Proliferation and Disarmament Initiative is a positive contribution to further the agreements made at the NPT in 2010. The focus of the group of 12 countries on reducing the role of nuclear weapons in security strategies and doctrines is especially welcome. This cross regional group has a lot to offer.

I’m very encouraged that many NPDI members are making plans this spring to submit reports on their progress on disarmament and non-proliferation in the context of the 2010 NPT action plan.

This type of reporting is useful to bring about transparency- not only in capabilities and capacity, but also in nuclear weapons policies. I sincerely hope that the Dutch report to the NPT will detail the efforts made to date to elevate the discussions on nonstrategic nuclear weapons, as well as efforts to shift national strategies away from a reliance on nuclear weapons.

At the end of the day, it is a national decision.

NPDI members could also include in their reports the need for reduction, relocation, and dismantlement of current non-strategic nuclear arsenals, and explain how they are working for this in other forums.

NPDI members could encourage the reduced reliance on nuclear weapons in security strategies by issuing national and joint declarations that their security arrangements are not predicated on nuclear weapons, and publicly recognise that retaliation with nuclear weapons on their behalf has the potential to cause catastrophic humanitarian harm.

FMCT GGE
Another effort of the Netherlands is the effort to support the start of negotiations on a treaty banning fissile materials for nuclear weapons.

Such a treaty could lead to the full elimination of all materials and infrastructure designed to build the explosive capacity of nuclear weapons.

When discussing the options for a fissile materials treaty, the government has clearly recognised the over 15 year failure of the Conference on Disarmament to start negotiations needs to be dealt with, and we welcome the positive contributions through seminars and events to build knowledge and capacity for future negotiations.

Now the Netherlands will be sitting in a group of governmental experts, which is responsible for “recommendations on possible aspects which could contribute to, but not negotiate, a treaty banning the production of fissile material for nuclear weapons or other nuclear explosive
devices” and will “operate on the basis of consensus, without prejudice to national positions in future negotiations, meeting in Geneva for two sessions of two weeks in each of 2014 and 2015;”

This role is a good one, and should be supported by this chamber. In addition, this chamber should ask for regular reports on the efforts in the Group of Governmental Efforts- to both be reported back to this house and also incorporated into national reports and statements to the UN General Assembly and NPT meetings.

The fact that the Group of Governmental experts will not conclude its work until after the 2015 NPT review conference, however, is a missed opportunity. It means that the agreements to make this a global priority made during the 2010 NPT Review Conference, just haven’t been lived up to.

Since 1957, there has been global attention to the need to create this type of treaty. For 17 years, it has been the priority of most of the countries that participate in the Conference on Disarmament, yet no negotiations have begun.

This chamber could recommend that the government insist discussions related to a fissile materials treaty be taken out of the deadlocked Conference on Disarmament, and instead be under the auspices of the UN General Assembly, including the opportunity for voting and to eliminate the need for consensus decision making on any outcomes.

Consensus is ideal, but we do not live in an ideal world. To achieve progress on nuclear disarmament and nonproliferation, the time is ripe to at least include the option of voting.

Let me turn now to the discussions within NATO.

First, I think that we should give credit to the government efforts to make some steps towards transparency. The fact that the Defence and Deterrence Posture Review was made into a public document is helpful, and demonstrates the government’s recognition that the trend towards democratisation of security, towards open and honest national discussions, is mutually beneficial.

“NATO decisions are taken by consensus, NATO must reach unanimity on this [the issue of nonstrategic nuclear weapons] before discussions with Russia on the reduction or elimination of NSNWs in Europe can begin.”

I want to raise a significant concern with this statement.

First, it equates consensus with unanimity.  These are conceptually different. Consensus is the community resolution when opposing parties set aside their differences and agree on a statement that is agreeable to all, even if only barely. even if parties disagree, there is still overall ‘consent’ to move forward in order to settle the issue. This requires co-operation among those with different interests and opinions. Consensus is not the same as unanimity.

Insisting on unanimity can allow a minority opinion to stop the process. If someone knows that the group cannot move forward without their consent, they may harden their position in order to get their way. This is what seems to be happening inside NATO discussions and decision making.

The government should recognise the difference between these two concepts. It should identify areas of agreement, and move forward where the same view is shared.

A complicated dispute, like the role of nuclear weapons in NATO policy, might involve several issues- deployments, cost responsibilities, modernisation, varied security interest, alliance solidarity, transparency, confidence building measures, etc. Some issues are more controversial than others. But a disagreement on one issue should not prevent consensus on another. By unpacking the different issues, and not insisting on unanimity on the whole at once, there are more opportunities to move the debate forward.

NATO member states have a variety of opinions and national positions- including legally binding obligations, that prevent unanimity. There is a lot more flexibility than is commonly assumed.

The easiest example of this is the absence of France in the Nuclear Planning Group. France has made a national decision not to participate. That’s okay. They can, and do, have a different national nuclear policy than the NATO policy.

Countries can, and do, have national policies that are not in unanimous agreement with NATO.

The Netherlands can do this as well.

— that’s where I ran out of time, but I also wanted to say the following::

At NATO level the Netherlands is pressing for the reduction and eventual elimination of NSNWs throughout Europe, on the basis of negotiation and reciprocity. Partly at the instigation of the Netherlands and other NATO member states that are pursuing the same goals, the DDPR states that NATO is willing to consider further reductions in these weapons on the basis of reciprocity with Russia, and taking account of Russia’s considerably larger numbers of NSNWs in Europe.

I have concerns that this is a misinterpretation of the DDPR. The DDPR specifically states that NATO is willing to consider “further reducing its requirement for non-strategic nuclear weapons assigned to the Alliance in the context of reciprocal steps by Russia”. It does not require Russian reciprocity as a basis for moving forward. The DDPR deliberately leaves space for interpretation of the context, and does not explicitly require reciprocal action by Russia.

Catastrophic Humanitarian Consequences
Firstly, it is important to recognise that the ultimate driver of all WMD disarmament and non-proliferation efforts has historically been the concern about the catastrophic humanitarian consequences of any use of these weapons.

In 2010, the Dutch government “expresse[d] its deep concern at the catastrophic humanitarian consequences of any use of nuclear weapons and reaffirm[ed] the need for all States at all times to comply with applicable international law, including international humanitarian law.”(2010 NPT Review Conference Final Document)

“It is in the interest of the very survival of humanity that nuclear weapons are never used again, under any circumstances. The catastrophic effects of a nuclear weapon detonation, whether by accident, miscalculation or design, cannot be adequately addressed. All efforts must be exerted to eliminate the threat of these weapons of mass destruction.”

The Netherlands did not join these statements. As has been explained to this chamber before, the government does not rule out the use of nuclear weapons in its security policy, despite the recognition that “devastating immediate and long-term humanitarian impacts of a nuclear weapon detonation are of clear concern” as explained in another joint statement that the Dutch did join during the recent General Assembly.

It is clear that the government recognizes the consequences of any use of nuclear weapons, but it does not rule out the possibility of using these weapons.

Furthermore, the government agreed “to pursue policies that are fully compatible with the [non-proliferation] Treaty and the objective of achieving a world without nuclear weapons.”

The policy letter of October 2013 reaffirms the centrality of the nuclear Non Proliferation Treaty and its related obligations. It is important to remember that a Non-Nuclear Weapons State NPT member, the government has a legally binding obligation never to accept transfer the of nuclear weapons; Never to acquire nuclear weapons of its own, and: to negotiate nuclear disarmament.

In the policy letter the government recognises that “there are still fundamental holes in the international legal structure regarding nuclear matters” and it “aims to reduce the number of conventional weapons in the world and ban chemical, biological and nuclear weapons.”

Simply banning nuclear weapons won’t guarantee their elimination, but a ban is more likely to have a direct beneficial impact on current efforts of the Netherlands to achieve and maintain a nuclear weapons free world than leaving this legal loophole open.