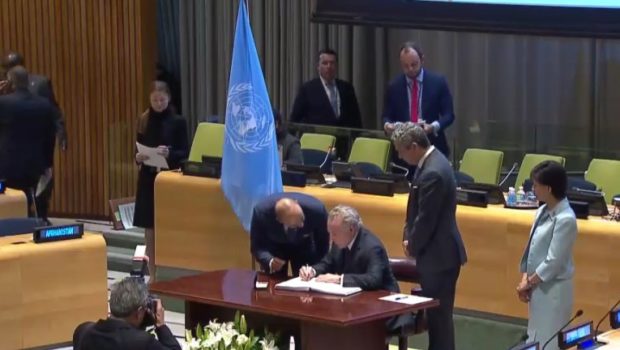 On Wednesday 20 September, the new Treaty for the Prohibition of Nuclear Weapons officially opened for signature, and responsible countries from around the world started signing up. Brazil was the first country to sign the Treaty, followed by iver 50 other countries representing all regions of the world: from Africa, Europe, South-America to the Pacific.

Secretary General Mr. Guterres of the United Nations opened the ceremony, noting the important role civil society had played in making the treaty happen. Beatrice Fihn, executive director of ICAN, represented civil society. She remembered the victims of the use and testing of nuclear weapons, noting that this treaty gives them a voice. She also recognized the efforts of the core group of countries and civil society in achieving the treaty: “Groundbreaking steps forward do not start with consensus agreement … someone has to be brave and lead.”

The threat of nuclear weapons is all over the news right now. Donald Trump’s threats to “totally destroy” North Korea if they do not end their nuclear weapons programme are not the only nuclear threats there are also nearly 15,000 weapons scattered around the world in the arsenals of eight other countries. Still, for the first time, since, maybe the 1980s people are scared about nuclear weapons. They should be.

Nuclear weapons are terrifying. A blinding flash, a burning wind, the sound of a thousand thunderstorms, a cry for water too poisoned to drink, for help that isn’t coming, only to end by begging for death. Those are the realities of nuclear weapons.

But, responsible governments are taking action to end the nuclear weapons threat. Those that sign the Treaty on the Prohibition of Nuclear weapons recognise that the risk of nuclear weapons is too high, and that the only way to protect anyone from getting nuked is to get rid of nukes altogether.

This treaty doesn’t solve every nuclear weapons problem, but it does start dealing with the root of the problem.

Richard Nixon reportedly walked around the White House claiming that he could kill 70 million people with the push of a button. That should be illegal, and thanks to the responsible governments of the world, it now is.