“Do not go gently into that good night but rage, rage against the dying of the light!” – Dylan Thomas 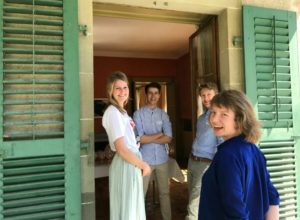 The voice of Philip J. Jennings, General Secretary of UNI Global Union fires up the room this early Sunday morning. His frank speech calling on a closer association between the threatened labour unions and the NPT’s endorsement, kicks off this second and last day of the ICAN meeting in Geneva.

As the waltz between one breakout session to the other goes on throughout the day, the passion and dedication of the ICAN campaigners infuses the meetings. Being a newcomer doesn’t stop me from witnessing the excitement boiling in each and every one of these meeting rooms. One can easily observe the dedicated work that all these ICAN associates put in a year and that their eagerness to share it with others. There’s something deeply inspiring to see people from all four corners of the earth correlating together on a cause that will affect all of us. To have NGO representatives seek feedback on how to get their respective governments to cooperate more with them and see another advise them on what worked for them is deeply satisfying. I truly admire their dedication and their continuous prolonged efforts to make progress on the treaty.

It is crucial to choose our words carefully

I exit the building of La Pastorale feeling empowered. Withal, this weekend-long meeting also helps to emphasise the power of norms and narratives. Language is the main actor in shaping our perception of the world. Using words such as ‘Nuclear endorsing states’ instead of ‘Nuclear umbrella’ have a huge impact in influencing our perception of the world. Yet, it is with these same perceptions that we dialogue amongst ourselves. That is why it is crucial to choose our words carefully, the opposite of which could lead to drastic consequences.

Altogether, this intensive weekend-long meeting has helped me understand with more depth the lobbying that takes place to make things move forward. Lobbying for the banishment of Nuclear weapons is a highly fluctuating world, things happening unexpectedly, thus leading to improvements and setbacks. Who would have seen coming the Democratic People’s Republic of Korea’s announcement that they would suspend nuclear testing?

* Romain Lepla is student at Leiden University College and one of the 14 students participating in the PAX Nuclear Crash Course.