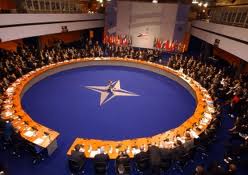 “Yes, but we need to take into consideration the complex and diverse views in NATO.” If I got a penny any time a diplomat said this to me at the NPT, I would have earned roughly a pound, this morning alone.

It is bewildering how states—during discussions in the NPT framework—keep using NATO as an excuse for not fulfilling agreements, or for not even having much needed discussions. Article II of the NPT states, “Each non-nuclear-weapon State Party to the Treaty undertakes not to receive the transfer from any transferor whatsoever of nuclear weapons.” But the five states hosting US nuclear weapons as part of NATO nuclear sharing agreements argue that hosting these weapons, and preparing to drop them by purchasing dual-capable aircraft and training pilots, does not actually violate Article II. When asked about it, delegates will tell you that only consensus among Allies can change this policy and that you need to take into account the complex and diverse views of Allies as a reason to avoid changing these practices.

Of course Russia is no longer regarded an enemy by most European states, but you have to take into account … so NATO seeks to modernise its nuclear weapons and keep them in Europe just in case. The US is doing everything it can to achieve a further round of deep reductions … but it has to take into account the needs of NATO allies … and therefore the US government spends $11 billion on modernising B61 bombs instead of announcing reductions.

What, one wonders, is the special prerogative of NATO, that it can block and obstruct proceedings at a meeting of a Treaty to which it is not party in such a profound and resilient way? The answer is: NATO has no prerogative and that is exactly why this strategy works. Formally, NATO is not a factor in the proceedings of NPT (or the UN General Assembly, for that matter). NATO does not make statements, it does not produce working papers, there are no NATO delegations, and NATO members claim they do not vote as a block. This however, this also means that NATO is not accountable to the NPT and that the behaviour of the Alliance, as a collection of individual members, is not adequately reviewed. It provides a perfect escape clause: NATO states deny their sovereign accountability, pointing at NATO. And NATO cannot be held accountable.

This is all clearly understood. But why do the non-NATO states allow the NATO states to get away with this so easily? Why do they not challenge this escape clause? NPT states parties could write a working paper n which they investigate this issue and propose to do either of the following things:

More than twenty years after the dissolution of the Warsaw Pact, it is time that the NATO alliance members too, become individually fully accountable.