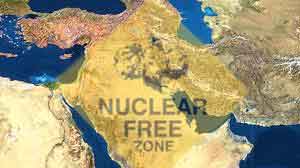 The Middle East Free of Weapons of Mass Destruction?

On Tuesday 4 September ‘The Hague Programme on Disarmament and Non-Proliferation’ organizes a public event with informal sandwich lunch on ambitions and opportunities to reach a mass destruction weapon-free zone in the Middle East.

‘The Hague Programme on Disarmament and Non-Proliferation’ is an informal platform of the Municipality of The Hague, IKV Pax Christi, the Organisation for the Prohibition of Chemical Weapons (OPCW), the Dutch Ministry of Foreign Affairs, the Dutch Ministry of Economic Affairs, the Clingendael Institute, the Asser Institute and Leiden University – Campus The Hague. The official invitation will be circulated in the second half of August.