Weblog on security issues
On www.protectionofcivilians.org bloggers from IKV Pax Christi keep you informed on the latest developments concerning security issues; from nuclear disarmament to cluster munitions, from human security to arms trade. Here is a selection of the blogs of the last couple of weeks:

For a overview of all blogs please visit www.protectionofcivilians.org. 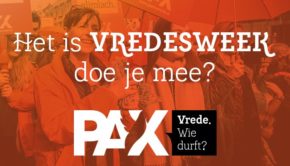