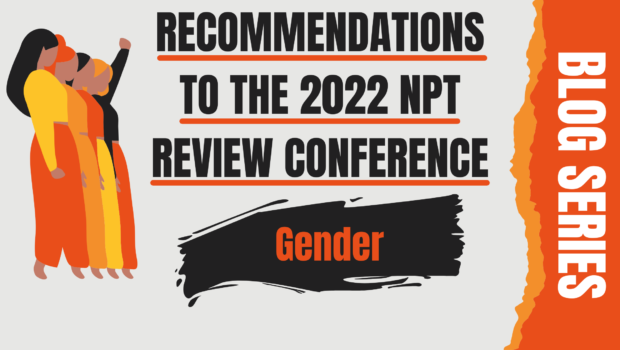 In the run up to the tenth Review Conference of the Parties to the Treaty on the Non-Proliferation of Nuclear Weapons (NPT), which is scheduled to take place in early 2022, we will post a series of blogs in which we provide recommendations to States Parties. In this blog, we will focus on the relationship between gender and nuclear weapons. Considering the disproportionate impact of nuclear weapons on women, and the historical under-representation of women in nuclear weapons diplomacy, PAX urges States Parties to ensure gender parity within their delegations to the NPT Review Conference. In this blog, we will further discuss why it is important to improve gender equality and diversity in the treaty review process.

In recent years, increasing attention has been paid to gender representation in relation to the NPT Review process and nuclear weapons. In 2018, the Chairs’ factual summary stated that States Parties endorsed the fundamental importance of promoting the equal participation and leadership of both women and men in relation to the three pillars of the NPT. Furthermore, States Parties acknowledged that the disproportionate impact of ionizing radiation on women and girls should be factored into discussions during the next NPT Review Conference. The topics of gender diversity and gender perspectives are also considered in several working papers submitted to the 2019 Preparatory Committee.

Before we start discussing why it is important to improve gender equality and apply a gender analysis in relation to nuclear weapons, it is important to understand the concept of gender. According to the UN Women Training Centre, gender “refers to the roles, behaviors, activities, and attributes that a given society at a given time considers appropriate for men and women.” A gender is associated with certain social attributes, opportunities, and beliefs about how a person of a specific gender ought to behave, which shape the relationships between people. These attributes, opportunities and relationships are not biologically determined, but they are socially constructed and can vary across different contexts. In most societies, there exist differences and inequalities between women and men in the responsibilities they have, their access and control over resources, and their ability to participate in decision-making.

Gender equality, on the other hand, is achieved when the rights, responsibilities, and opportunities that individuals have do not depend on their gender. In relation to nuclear weapons, there exist certain gender inequalities and differences in three different areas: 1) participation in the treaty review process, 2) the impact of nuclear weapons, and 3) the discourse used to talk about nuclear weapons.

Firstly, research conducted by Article 36 has shown that women are inadequately represented at the meetings of international treaties and processes regarding disarmament and weapons issues, including those meetings concerning nuclear weapons. In fact, almost half of all country delegations at any of these meetings are likely to be composed entirely of men. At the international forums and meetings that took place between 2010 and 2014, only around a quarter of official country delegates were women, and less than a fifth of statements were given by a woman.

More recently, UNIDIR also stated that while the proportion of women participating in arms control, non-proliferation and disarmament diplomacy has grown steadily over the last four decades, women remain underrepresented. In 2015, approximately 30 percent of the participants in meetings of the treaty review process were women. As women make up 50 per cent of the population, it is important to improve the participation of women in the treaty process.

That it is indeed possible to improve the participation of women during meetings of international treaties and processes, becomes clear from the negotiations on the Treaty on the Prohibition of Nuclear Weapons (TPNW). While the average proportion of women participating in those negotiations (31 percent) and leading delegations (15 percent) do not stand out from comparable meetings, several women occupied prominent positions in those negotiations. Many of the most active delegations were led by women, including Ireland, New Zealand, the Philippines, South Africa, Sweden, Switzerland and Thailand, and Elayne Whyte Gomez of Costa Rica was the negotiating conference president. As such, these women enjoyed greater levels of visibility and their voices were heard more than usual. Thus, while greater participation of women during the treaty review process would be great, it is most important that women are able to participate in a meaningful way and influence decision-making. Their visibility matters.

Improving gender equality in terms of participation in the NPT review process could positively impact the effectiveness of the treaty process and its outcomes. According to one of the working papers submitted in 2019, “diverse teams are more innovative, take more sustainable decisions and are more effective in resolving impasses.” Similarly, Ireland states in their working paper that “diversity and differing perspectives enrich our deliberations.” Considering that States Parties failed to reach consensus on an outcome document in 2015, this review conference presents an opportunity to make the treaty process more effective and produce effective outcomes. The TPNW, which recently entered into force, also considers the “equal, full and effective participation of both women and men” to be essential in attaining sustainable peace and security.

Additionally, women should have equal opportunity to take part in decision making about matters that affect their lives, especially considering the disproportionate impact of nuclear weapons on women and girls, which we will discuss in the next section.

Bringing in a gender perspective on nuclear weapons is also important since the use and testing of nuclear weapons has a disproportionate impact on women and girls. This involves both sex-specific impacts and specific effects. Firstly, women and girls are biologically more vulnerable to the harmful effects of ionizing radiation than men. A study performed among survivors of the bombings of Hiroshima and Nagasaki, for instance, showed that the risk of developing and dying of solid cancer due to ionizing exposure was nearly twice as high for women as for men. Furthermore, high doses of ionizing radiation can also have a negative effect on pregnancies as it increases the chances of physical malformations, intellectual development disorders, spontaneous abortions, and stillbirths. The TPNW is important in this regard, as it is the first international treaty on nuclear weapons to address the disproportionate impact of nuclear weapons on women and girls.

As for the gender-specific impacts, women might be affected more strongly by the psychological impacts of radiation contamination. After the Chernobyl nuclear accident fallout, for instance, women in most European countries reported more stress than men, and women were shown to have taken protective measures more often. Another study showed that mothers with children under 18 in the city of Gomel, approximately 110 kilometers north of Chernobyl, more frequently had mental health problems. Furthermore, displacement as a result of nuclear weapon detonation could also pose specific risks to women as women are less likely than men to have access to their rights, which can be worsened by displacement. Due to this, women are more vulnerable to sexual and gender-based violence, have less access to assistance, and are more likely to face difficulties in exercising rights to housing, land, and property—exacerbating pre-existing patterns of discrimination.

As nuclear weapons affect men and women in different ways, it is important to perform gender sensitive analysis in policy making related to nuclear disarmament and non-proliferation, to make sure that both women and men benefit from certain policies and are equitably involved in the development, implementation, and review of policymaking. Gender analysis is a “critical examination of how differences in gender roles, activities, needs, opportunities and rights/entitlements affect men, women, girls, boys, non-binary or gender-fluid persons in certain situation or contexts.” A gender analysis is thus a way of looking at situations and issues where you take the respective roles of men and women in society into account. It examines the relationships between genders and their access to and control of resources and the constraints they face relative to each other.

By applying a gender analysis or perspective, states can examine whether suggested policies would help to reduce gender inequalities and effectively address the differential needs of women and men. Furthermore, it can also help States Parties to improve gender equality in their delegations and promote the full, meaningful, and equal participation of women and men in decision-making processes related to the Non-Proliferation Treaty.

Lastly, as ICAN described in their paper on gender and nuclear weapons, it is important to pay attention to gender in relation to nuclear weapons as the discourse around nuclear weapons is highly gendered. Throughout history, military and governance strategies have been developed with patriarchal values, meaning that traits that are typically seen as masculine, such as strength and force, are valued, as to where traits that are considered to be more feminine, such as seeking dialogue, empathy and compromise, are assigned less value. The readiness to use nuclear weapons, for instance, is therefore often seen as something masculine and strong, as to where the desire to disarm is often equated to femininity and weakness. This discourse makes it seem more rational to use nuclear weapons as compared to wanting to eliminate them, which shapes the narrative surrounding nuclear weapons by decision-makers, media, and advocates. The use of this kind of gendered discourse causes harmful stereotypes about power and security to persist and leads to an over-reliance on militarism to solve conflicts instead of considering disarmament and diplomatic approaches to manage international relationships. This, in turn, adds to instability and a focus on intimidation as a means of peacekeeping.

Several organizations, such as the Women’s International League for Peace and Freedom (WILPF) and the Center for Feminist Foreign Policy (CFFP) also acknowledge the missing feminist perspective in discussions surrounding conflict and peace and aim to elevate women’s and other marginalized groups’ experiences and agency within foreign policy and counter the dominant narratives surrounding peace and security. In order to create sustainable peace, we need a feminist approach to foreign policy which can offer alternatives to existing narratives surrounding peace and security and which is not rooted in patriarchy, imperialism, capitalism, and/ or militarism.

PAX encourages all States Parties to improve the equal, meaningful, and effective participation and leadership of men and women in the treaty review process. All states should strive for gender parity on their delegations and the value of visibility of traditionally under-represented genders. Furthermore, all states should recognize the specific impact of nuclear weapons and related technologies on women and girls. Thirdly, PAX urges delegations to incorporate a gender sensitive analysis across all three pillars, to better understand how national policies can reflect the diversity of impacts and needs associated with disarmament, non-proliferation, and the peaceful uses of nuclear technology. Lastly, States Parties should avoid using gendered discourse that perpetuates harmful stereotypes about power and security.

While this blog has focused on improving the participation of women in the NPT review process, it is important to note that it is not only important to promote the meaningful participation of women, but also of other groups that have been marginalized in the debate around nuclear weapons. We need new perspectives and approaches to nuclear disarmament and diverse teams are more innovative and make more sustainable decisions. Only including women that have similar backgrounds to the men that currently dominate the debate will not make a big difference. Therefore, attention should also be paid to improving the position of, for instance, non-Western and non-white people, survivors of nuclear weapons use and testing, and non-binary people.

This blog is part of a series of recommendations to the 2022 NPT Review Conference. Keep an eye on our website for our next blog in the run up to the NPT RevCon 2022.