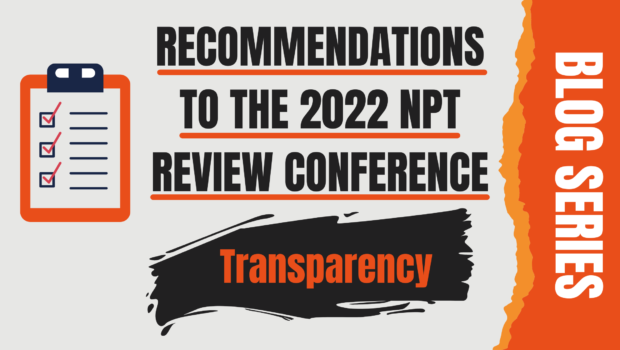 The importance of transparency

Firstly, transparency is important in relation to the nuclear arsenals of the nuclear-weapon states. Increasing the transparency in relation to the size of a country’s respective nuclear arsenal helps to build confidence and trust, particularly among non-nuclear weapon states. Greater transparency about the size of nuclear weapons arsenals removes uncertainties, which reduces the risk of misjudgments during times of crisis. Furthermore, it will also benefit any negotiations on the reduction and elimination of nuclear weapons. Transparency is also important in relation to the implementation of the NPT by all States Parties, as this would provide opportunities for objective analysis of the status of implementation of NPT agreements and would help to build trust and confidence among States Parties.

The importance of transparency is reaffirmed in several broadly agreed-upon documents, such as the final documents of the 2000 and 2010 Review Conferences and dozens of  working papers submitted during the 2015 and 2020 review cycles. In the 2010 NPT Review Conference, all States Parties committed to applying “the principles of irreversibility, verifiability and transparency in relation to the implementation of their treaty obligations.” Furthermore, the Non-Proliferation and Disarmament Initiative (NPDI), a group of 10 NPT member states (including the Netherlands) focused on taking forward the outcomes of the 2010 NPT Review Conference, stated in a working paper that “the principle of transparency, like those of irreversibility and verifiability, is indispensable for nuclear disarmament.”

Despite the emphasis placed on the importance of transparency, however, two states recently announced an end to transparency practices – the UK and the US. The decision of the UK and the US to reduce transparency about their nuclear arsenal contradicts with action 2 of the 2010 Action Plan adopted at the 2010 Review Conference, with which states committed to providing transparency in relation to their implementation of treaty obligations, and action 5, which requires nuclear-weapon states to disarm by, amongst other things, enhancing transparency. It is of great importance, however, that states increase their transparency in relation to the size of their nuclear arsenal, as will be explained below.

Firstly, transparency is important in relation to the nuclear arsenals of the nuclear-weapon states. At the Ministerial Meeting of the Stockholm Initiative for Nuclear Disarmament in February 2020, the ministers of 15 states issued a joint statement in favor of maximizing transparency on nuclear weapons. PAX also previously emphasized the importance of having an accurate count of the size of nuclear arsenals of nuclear-weapon states as it will build confidence among non nuclear weapons states to see that nuclear-weapon states are delivering on their promises. Furthermore, it helps to establish a baseline for assessing the progress made in disarmament in the future.

When reporting on the number of nuclear-weapons in their possession, states do not have to disclose all locations of their nuclear weapons and they also do not need to provide details about strategic vs. non-strategic weapons. One distinction should be made, however, and that is of deployed vs. non-deployed weapons. While the number of nuclear warheads in the world was smaller in early 2021 as compared to 2020, more nuclear weapons have been deployed with operational forces. Deployment means that the warheads that contain nuclear explosives are kept attached to delivery vehicles, ballistic missiles or aircraft, so that they can be used faster and easier to attack a specific target. SIPRI reported that the number of nuclear weapons currently deployed with operational forces increased to 3825 in 2020, from 3720 in 2019. Around 2000 of these – nearly all of which belonged to Russia or the US – were kept in a state of high operational alert. Thus, while the overall number of nuclear weapons might have gone down in the past years, more nuclear warheads are ready to be used which increases nuclear risk.Therefore, in order to accurately assess the progress made in nuclear disarmament and assess the nuclear risk we are exposed to, it is important for states to report on the amount of deployed vs. non-deployed weapons they possess.

The placement of the U.S. nuclear weapons in the Netherlands is supposedly laid down in several bilateral agreements between the Netherlands and the United States. However, due to the lack of transparency about these bilateral agreements, it is very difficult to have a meaningful public debate about these weapons. The House of Representatives has repeatedly asked the Dutch government to provide more information on the presence of U.S. nuclear weapons on Dutch territory. Any discussion about these weapons is, however, immediately shut down, as the government argues that bilateral agreements prevent them from being able to disclose information about the numbers and locations of U.S. nuclear weapons in Europe. The original agreements with the US that were made in the 1960s will remain classified until after 2030. There is no information about the current costs of the Dutch nuclear weapons task and how this task is executed, denying elected officials the opportunity to fulfil their democratic oversight duties.

A well-functioning democracy, however, is based on providing accurate information to the public. Withholding information or entering into agreements to prevent information sharing undermines democratic decision-making. In order not to undermine the democratic process, the government should be cautious about withholding information, unless it is necessary to ensure national security. However, this is not the case for the U.S. nuclear weapons in Europe, as it is already well known that these weapons are stored there, and this has not had any negative impact on safety within these European countries. During the NPT Review Conference in 2015, there already existed total agreement on “the importance of supporting cooperation among Governments, the United Nations, other international and regional organizations and civil society aimed at increasing confidence, improving transparency and developing efficient verification capabilities related to nuclear disarmament.” Therefore, it is high time for governments to live up to the commitments they made and increase transparency about nuclear weapons arsenals.

Transparency about the implementation of the NPT

Secondly, transparency is important in relation to the implementation of the NPT by all States Parties. The 2010 NPT Action Plan requests all states to submit regular reports on their implementation of the 2010 Action Plan and the previous practical steps they agreed to in 1995 and 2000. One of the stepping stones (action points) put forward by the ministers of 15 NPT states also urges States Parties “to report on their implementation of obligations and commitments under the NPT using a standardized reporting format, and to support proposals to strengthen reporting and transparency commitments.”

The submission of standardized national reports will help to promote mutual understanding among states. Furthermore, according to the NPDI, since most non-nuclear-weapon states already implement non-proliferation and safeguards measures, enhancing transparency will also serve to improve the mechanism of responsibility, especially for nuclear-weapon states as they would demonstrate their implementation of all articles of the treaty, in particular article VI. While it is especially important that nuclear-weapon states submit an annual report, it is also useful for non-nuclear weapon states to submit annual reports, as this will help to create baselines and establish a common frame of reference, which helps states access the progress made in implementing the NPT.

In relation to the non-nuclear weapon states, a distinction could also be made between states that rely on nuclear weapons in their own security strategies or who are a part of bilateral nuclear umbrella agreements and those who do not rely on nuclear weapons in their security strategies. In 2013, PAX has already created a draft reporting form that could be used for non-nuclear weapon states with and without bilateral nuclear umbrella agreements, where states can provide information similar to the draft reporting form suggested for nuclear-weapon states. The NPDI also proposed a reporting form in 2015, where states can provide information on their implementation of all 64 articles of the 2010 Action Plan. These reporting forms provide clear examples of what such a standardized report could look like.