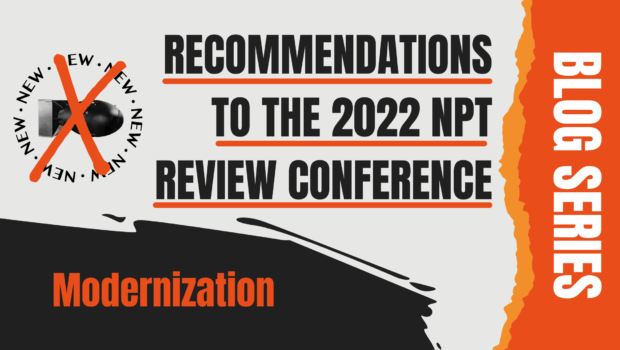 In the run up to the tenth Review Conference of the Parties to the Treaty on the Non-Proliferation of Nuclear Weapons (NPT), which is scheduled to take place in early 2022, we will post a series of blogs in which we provide recommendations to States Parties for the upcoming Review Conference. In this blog, we will focus on the modernization programs of the five nuclear-weapon states under the NPT. We will further illustrate why it is important for nuclear-weapon states to end their modernization programs and for non-nuclear weapon states to demand verificable action.

Instead of working on nuclear disarmament, all nuclear-weapon states appear to want to maintain their large stockpiles of weapons and even expand their existing arsenals. A recent report published by ICAN showed that in 2020, the five nuclear-armed states under the NPT (China, France, the United States, the United Kingdom and Russia) together spend $67.4 billion dollars (€56.5 billion) on their nuclear weapons, despite the ongoing global pandemic. Furthermore, all five nuclear-weapon states are all developing or deploying new weapon systems or intend to do so in the near future.

The modernization programmes of the five nuclear-armed states, which will be discussed in more detail below, not only breach the NPT, but they also violate something even more foundational than this important international treaty: the trust of non-nuclear armed states. When all states parties signed the treaty, they promised to pursue disarmament in good-faith. Nevertheless, the nuclear armed states have been ignoring their obligations under the NPT for decades, as they continue to cling to their nuclear arsenals as if the mere existence of these weapons does not ensure mutual destruction. How much longer are non-nuclear armed states supposed to believe anything that nuclear-armed states say? Their actions, as will be illustrated in the paragraphs below, clearly show that they don’t take nuclear disarmament seriously.

Currently, the United States (US) has 5,550 nuclear weapons, on which they spent a whopping $37.4 billion in 2020. With this, the United States spends more on its nuclear-weapon programme than all other countries in the world combined. The US plans to modernize its arsenal within the next three decades at the price of approximately $2 trillion.The US is not only modernizing its weapons arsenal, but it is also building entirely new weapons, such a new nuclear-capable strategic bomber and a new long-range air-launched cruise missile. In doing so, the US violates obligations made under the NPT and other international law and continues to contribute to a dangerous nuclear arms race.

These plans also have consequences for the Netherlands and other European NATO members that host US nuclear weapons within their country, as the United States plans to replace all nuclear warheads deployed in Europe with updated B61-12 bombs. The new bombs combine enhanced accuracy with low-yield options. These weapons are riskier as they mistakenly suggest that they will reduce indiscriminate harm by being more accurate and lower yield, and this could lower the threshold for nuclear use. The risk of nuclear weapons use is further increased by the most recent Nuclear Posture Review from 2018, where the US suggests using nuclear weapons in response to non-nuclear threats. While a new US nuclear posture review is in process, the existing policy also suggests that the US would no longer refrain from using nuclear weapons against non-nuclear weapon states under the NPT.

The United Kingdom (UK) currently possesses 225 nuclear weapons, which cost them about $6.2 billion in 2020. This comes down to about 10.5 percent of the total UK defence spending in 2020. The UK government recently announced its plans to increase their nuclear weapon stockpile cap to 260 warheads and end transparency practices to limit the information they provide about the number of operational warheads they possess. The plans of the UK to expand its arsenal and modernize its weapons present a violation of Article VI of the NPT. The UK, however, argues that its decision to increase its nuclear weapons stockpile is warranted due to national security concerns and that it is legitimate under the NPT. In doing so, the UK sets a dangerous precedent that could lead to other nuclear-weapon states making a similar argument in order to increase their stockpiles as well. If this argument is accepted by a majority of states, this would considerably weaken the NPT and pose a great danger to all nations in the world. Like the US, the UK has also expanded the possible range of scenarios in which it will consider a nuclear response.

France is estimated to possess 290 nuclear weapons. In 2020, the French allocated €4.7 billion for nuclear deterrence, which includes the costs of modernisation and renewal of nuclear-capable cruise missiles, submarine-launched missiles and submarines. This number comes down to 11 percent of France’s total military budget. ICAN suspects that this sum still excludes certain additional costs. Little progress has been made by France in relation to disarmament and the country continues to invest heavily in the modernization and renewal of its nuclear weapons.

China has 350 nuclear weapons which they spent an estimated $10.1 billion on in 2020. China is believed to be quantitatively increasing and modernizing its nuclear arsenal. The country is continuing its modernization program which was initiated in the 1980s and increased in the 1990s and 2000s, fielding more types and greater numbers of nuclear weapons than ever before. For the first time, it is developing a so-called nuclear triad, consisting of new land- and sea-based missiles and nuclear-capable aircraft.

Russia has 6,257 nuclear weapons, which they spent about $8 billion on in 2020. Russia is in the middle of a decades-long modernization of its strategic and nonstrategic nuclear arsenals with the aim of replacing the Soviet-era weapons with newer systems. The Russian president Vladimir Putin mentioned in 2020 that about 86 percent of Russia’s nuclear triad consists of modern weapons and equipment. The strategic modernization plans of Russia show that the country is determined to maintain its strategic nuclear forces and preserve parity with the US in terms of the size of their nuclear arsenals and delivery systems. Both Russia and the US have given new or expanded roles to nuclear weapons within their military doctrines, which marks a significant reversal of the post-cold war trend towards the gradual marginalization of nuclear weapons.

The modernization plans, and in some instances, the plans to increase the nuclear weapons stockpile, constitute grave violations of the NPT. The NPT is not simply a non-proliferation treaty, but it also urges States Parties to negotiate nuclear disarmament. Twenty-five years ago, NPT States Parties agreed to key benchmarks at the historic 1995 Review and Extension Conference, including the commitment to the “complete elimination of nuclear weapons.” Further commitments were made at the 2000 and 2010 Review Conferences. At the NPT review conference in 2010, for instance, all States Parties agreed to pursue policies that are fully compatible with “the objective of achieving a world without nuclear weapons”. In addition, the NPT nuclear-armed states committed “to undertake further efforts to reduce and ultimately eliminate all types of nuclear weapons” and “to accelerate concrete progress on the steps leading to nuclear disarmament”. The 1995, 2000, and 2010 commitments with few exceptions remain relevant and important, but they have largely been unfulfilled. These modernization programs of nuclear states undermine the credibility of their commitment to the NPT, and specifically their disarmament obligations under Article VI.

As nuclear-armed and non-nuclear armed states seem to be drifting further apart, it is good to remind ourselves that, as Tom Sauer writes, all states ultimately want the same thing: security and peace. The difference lies in how states view the way to get there and how to maintain it. However, even nuclear-armed states are aware of the dangers of nuclear weapons and realize that large-scale use of these weapons would only ensure the destruction of both friend and foe. Furthermore, even nuclear-weapon states agree that the never-ending nuclear arms race is too costly and unnecessary to create a deterrent effect. And they too believe that it is useful to try to limit the number of nuclear weapons by means of arms control agreements. Considering all this, we can assume that even nuclear-weapon states must realize that nuclear weapons are not the way to go to reach sustainable peace.

Without some form of limitations on the pace and scope of nuclear modernization, reaching the goal of a world free of nuclear weapons will be impossible, as the current global nuclear competition between nuclear-armed states threatens to extend the nuclear era indefinitely. All NPT States Parties have a commitment towards a nuclear weapon free world, but ultimately, the nuclear-weapon states must assume their NPT responsibilities, including those that fall under Article VI. In order to get out of the impasse in nuclear disarmament that we have been in for years now, nuclear-armed states need to act and need to deliver on their promises.

PAX urges nuclear-weapon states to terminate their modernization programs and to safely and irreversibly eliminate their nuclear arsenals. Furthermore, it calls on states hosting nuclear weapons or states protected by nuclear sharing or umbrella agreements to encourage nuclear-weapon states to declare that they will not modernize their weapons and weapons delivery systems, and to engage in negotiations to eliminate these weapons from their own security strategies.