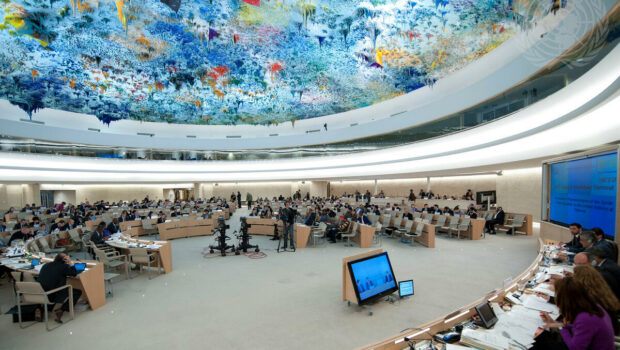 Nuclear weapons and the right to life: PAX turns to UN to urge Dutch government to join Nuclear Ban Treaty

Today, PAX submitted a stakeholder report for the Universal Periodic Review (UPR) of the Netherlands. The UPR is a unique United Nations (UN) mechanism which involves a review of the human rights record of all member states. In its submission, PAX calls upon the Dutch government to join the Treaty on the Prohibition of Nuclear Weapons (TPNW) and to work towards the full removal of all nuclear weapons on its territory.

What is the connection between nuclear disarmament and human rights? To answer this question, special attention should be paid to General Recommendation No. 36 on the right to life of the UN Human Rights Committee. Here, the Committee states:

The threat or use of weapons of mass destruction, in particular nuclear weapons, which are indiscriminate in effect and are of a nature to cause destruction of human life on a catastrophic scale, is incompatible with respect for the right to life and may amount to a crime under international law. States parties must take all necessary measures to stop the proliferation of weapons of mass destruction, including measures to prevent their acquisition by non-state actors, to refrain from developing, producing, testing, acquiring, stockpiling, selling, transferring and using them, to destroy existing stockpiles, and to take adequate measures of protection against accidental use, all in accordance with their international obligations. They must also respect their international obligations to pursue in good faith negotiations in order to achieve the aim of nuclear disarmament under strict and effective international control and to afford adequate reparation to victims whose right to life has been or is being adversely affected by the testing or use of weapons of mass destruction, in accordance with principles of international responsibility.

A clear link thus exists between nuclear weapons and human rights obligations, in particular the right to life as recognized under the International Convention on Civil and Political Rights (ICCPR). As concluded by the Human Rights Committee, any threat or use of nuclear weapons would be incompatible with this non-derogable right, and may amount to a crime under international law. Other relevant human rights concerns include the prohibition of inhumane and degrading treatment, the right to a home and to property as well as rights violations resulting from nuclear weapons testing.

The Netherlands is one of the five NATO members that still host US nuclear weapons as part of a nuclear-sharing agreement. With the arrival of the new F-35 Joint Strike Fighter (JSF) aircrafts at Volkel Air Base by the end of June 2022, these bombs are expected to be replaced by B61-12 models. These modernized bombs allow for the destruction of smaller targets with more precision. This will, however, only enhance the risk of their actual use, which would have catastrophic humanitarian consequences.

As PAX stresses in its submission, nuclear weapons pose a direct and constant threat to people and the environment. The current war in Ukraine only demonstrates that far from keeping the peace, these weapons of mass destruction enable acts of aggression against other states. PAX therefore calls on the Dutch government to work towards the full removal of all nuclear weapons on its territory.

PAX also reiterates its call on the Dutch government to sign and ratify the TPNW, which is the only comprehensive legally-binding prohibition which bans the development, possession, threats of use, and use of nuclear weapons and contains a framework for their verifiable dismantlement. Russia’s recent threats to use nuclear weapons emphasize the urgency for states to take meaningful steps towards nuclear disarmament and join the TPNW as soon as possible.

As an important first step towards joining the Treaty, the Netherlands should attend the First Meeting of States Parties of the TPNW, which has now been scheduled to take place from June 21st to June 23rd in Vienna.

PAX’ stakeholder submission can be accessed here. The formal review of the Netherlands will take place at the UPR’s 41st cycle in November 2022.