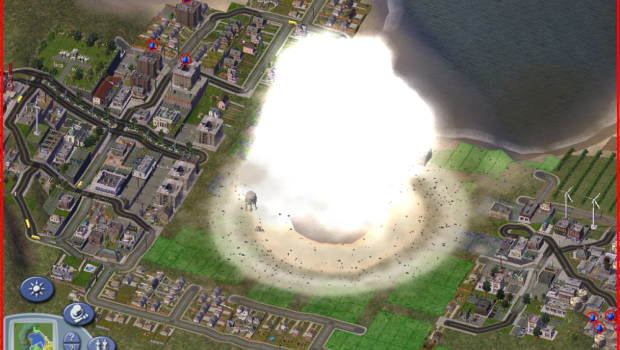 Working with IKV Pax Christi I have to walk through ‘the mall’ to get to our office. The mall as in Hoog Catharijne, a maze of indoor streets that lead you from the train to the city centre while being surrounded by shops, shops and shops, encouraging you to buy stuff you quite likely don’t need by broadcasting ‘muzak’ music, flashing advertisements, discounts and pouring the smell of perfumes and pastry baking in the allies.

This in combination with thousands of people moving in and out of the central station during the rush hour creates quite an effort for me to just stay calm and balanced as I would like to be, but I manage, keeping myself to myself and trying to ignore all the vibes trying to disturb my tranquility..

Noise, light flashes, big screen: I feel forced to look at this new add being forced into my brain: ‘The new simcity – your city – your game’. The image is of a fresh build city, rather boring.

Then a huge peacesymbol lands on a strip of bare land. Followed by a huge mushroom cloud.. Simcity under nuclear attack?

Disturbing to see nuclear warfare as a game, to chase away boredom and find some exitement. But then again, who care’s, it’s just a game and nuclear warfare in modern times is a highly unlike scenario. At least, that is what quite some people like to think..

The image of the simcity add came back to my mind when I was reading the newspaper yesterday (Volkskrant 28/38/13, VS vrezen een oorlog via internet) . Three years after the cyberattack on Iran the US seem to have opened Pandora’s box.. The US Army is poorly prepared for any major cyberattack by a country such as China or Russia. Cyberattacks are now seen as the biggest direct danger for the US.

The Defense Science Board with experts from amongst others Boeing and IBM, question if the US nuclear deterrence can survive a ‘catastrophic’ cyberattack.

Boeing, the company that just won a contract for the modernisation of the B61, the tactical nuclear weapon that is stationed at, amongst other places across Europe, the Volkel Airforce base in the Netherlands.

And IBM, the creators of the first personal computer.

Their advice ? Keep the option open to retaliate with nuclear weapons in case of a severe cyberattack.

Now how unlikely do you think nuclear warfare is again?