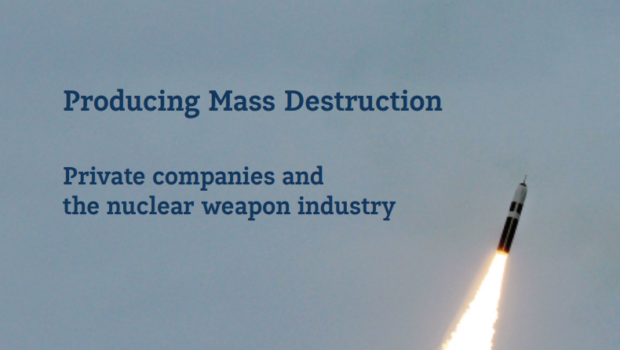 Today, ICAN and PAX co-published a new report that shows how the commercial sector is massively involved in producing nuclear weapons.  The report, “Producing mass destruction: Private companies and the nuclear weapons industry”, is part of the Don’t Bank on the Bomb project.

The report finds that nuclear armed governments have awarded at least $116 billion in contracts to private companies to build nuclear weapons.  Companies including Huntington Ingalls Industries, Lockheed Martin, Honeywell International, General Dynamics and Jacobs Engineering are directly involved in the nuclear weapon industry, seeking to profit from the production of weapons of mass destruction.

There are a few companies that stand out in terms of their overall nuclear weapon related activities, with billions in outstanding contracts. For example, Huntington Ingalls Industries, which is connected to several facilities in the US nuclear weapons complex, is part of more than US$ 28 billion in outstanding contracts. Lockheed Martin is a close runner-up, connected to more than US$ 25 billion in contracts.

PAX is a partner in the International Campaign to Abolish Nuclear Weapons, winner of the 2017 Nobel Peace Prize. As part of ICAN, PAX runs the Don’t Bank on the Bomb campaign, calling for divestment from the nuclear weapons industry.

How can civilians be protected from Weapons of Mass Destruction? →