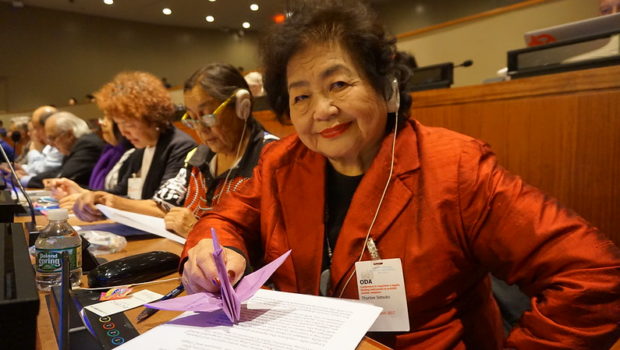 ”Many lost their entire family, but couldn’t even shed tears.”

Just before the 75th anniversary of the bombings of Hiroshima and Nagasaki, PAX’ nuclear weapons specialist Susi Snyder had the honor to interview Setsuko Thurlow. Setsuko is a Hiroshima Survivor who has become one of the most prominent and powerful campaigners against nuclear weapons. She received the Nobel Peace Prize in 2017 together with ICAN for the efforts to bring about the Treaty on the Prohibition of Nuclear Weapons and the worldwide campaign to abolish nuclear weapons.

Setsuko Thurlow (ST): ”Yes, very well! My life has turned crazy, many organizations ask for interviews and I have been involved in a number of projects. For example, I have written letters to several heads of state for the occasion of the 75th anniversary of Hiroshima and Nagasaki.”

SS:  ”I have heard about it and I saw the letter that went to the Dutch Prime Minister. It’s so much work that you’re putting into this. I’m just incredibly grateful that you have the time and energy to do this.”

ST: ”I am also working on other projects here in Canada. My colleague completed a historical study on Canada’s involvement in the decision to jointly work with the UK and the USA, to produce the atomic bomb and to drop them on Hiroshima and Nagasaki. Canadian uranium was used in the bomb. I wrote to the Prime Minister to ask him for a public acknowledgement of Canadas hidden history, to make a statement with remorse, and to ratify the TPNW.”

”Also, The Canadian Network to Abolish Nuclear Weapons (CNANW) – a nationwide network – is also starting a project to campaign for divestment.”

SS: ‘‘Setsuko, you went to study in the US, why did you decide to study sociology there?”

ST: ”Because I witnessed so much human suffering in Hiroshima as a child. For example, the war ended and soldiers started coming home without legs, without arms and were incapable of working. But at least those came home, there were also many households where the fathers never came home. The anger came later, I often wondered about that, because on that very day [6 August, when Hiroshima was bombed] I wasn’t feeling anything.”

“I was watching the masses of dead and suffering people. I watched my own sister and her four year old child being burned. They were near to dead for several days. They kept begging for water. We slept together in the same room, we wanted to look after them. But we didn’t have food or medication or anything. It was such a hard time. When they died the soldiers came, they dug op a hole, threw their bodies in, poured gasoline and they cremated them. They were standing there, just watching it, without any emotional response, not even tears. That memory troubled me for several years… What kind of human being am I? My dear sister and her child being treated like animals. There was no human dignity associated with that cremation. I questioned myself, I blamed myself, I have been feeling guilty. For several years I suffered from that.”

”I started studying psychology because there was an American psychologist who came to Hiroshima and his work really interested and helped me. He wanted to do a psychoanalytical study of survivors. One of the things he talked about was psychological close-off. In a situation like that our mind just automatically closes off to protect us. I read his book and it really helped me to stop blaming myself. I also talked with many of the surviving students about their experience. Many of them told me that they lost their entire family, but couldn’t even shed tears. I concluded this is a common phenomenon in a situation like that. So actually I don’t feel guilty about that anymore.”

SS: ”What led you to start using your anger?”

ST: ”Actually, by sharing my personal testimony. I think that helped many survivors to heal their own damaged or troubled souls. It was difficult, but that sharing process is necessary. The world must know what we went through. We believe that no other human being should have to go through that. By sharing that kind of understanding conviction, we are doing something important. That gave us a sense of achievement, we are doing something useful to help the world. Some people just decided to refuse to confront the reality, they refused to look back in their mind to the pain. They wanted to pretend that they can forget, that they can avoid that. I was able to grow up in my teenage years with very supportive, sensitive, understanding adults, parents, teachers and so forth. With that kind of supportive environment the closed mind could be opened faster than for those that remained in the darkness I think.”

”I went to go studying sociology in the United States because I wanted to be like those helpful selfless adults, who were rebuilding their own lives, family and the community. For that I needed a training, and at that time Japan was not equipped to provide that graduate level of professional training in social work. I wanted to go and come back and be a woman leader in Hiroshima.”

“When I just arrived in the United States, the press surrounded me and wanted my opinion on what was going on in the Marshall Island (the Bikini Atoll testing) and how Japanese people felt about it. I made a very open, honest, criticism of America’s continued testing; enough is enough. Hiroshima Nagasaki was enough, now those people in the South Pacific are suffering. The US should stop preparing for a nuclear war. I just arrived in the US and I was getting unsigned hate letters, they told me to go home. They threatened my life. I couldn’t attend the classroom. That’s the real trauma I experienced, and that is an important experience. I struggled to find a way to deal with that. I couldn’t go home but also didn’t know how to live in North America with so much hate. I decided that I should talk, I don’t know how I was able to do that. But I decided, if I don’t do that, who else can? With the strongest form of committed I came out, so that was a turning point for me to dedicate my life for the cause of disarmament.”

SS: ”You have done all these different thing through the years and so much has changed in the world from that day 75 years ago to where we are now – your beautiful speech in Oslo for accepting the Nobel Prize for example. What is the most important thing to get to disarmament?”

ST: ”I have been giving the human perspective. What do bombs do to people? We’re not discussing the scientific or engineering theories or weapon system. We simply share our personal experience and thoughts and beliefs, which are based on our lived experiences. We are giving that human perspective. We have been doing this, but somehow we haven’t done it well enough. Not effective enough to move the population of the world. The Hibakusha have been speaking out for the past 75 years, but somehow we haven’t received the public’s attention. Don’t you agree with that?”

SS: ‘‘You know, honestly Setsuko, I think people are afraid of the truth. It’s much easier to say they didn’t know than to look a strong powerful woman like you in the eye and hear what you have to say. Anyone who can do that, who can sit with you and hear your whole story… there is only one option and that option is nuclear abolition.”

”Setsuko, you have been such a strong part of our work here in the Netherlands. Without your story, without your encouragement, the Dutch government would have never joined the negotiations for the Treaty on the Prohibition of Nuclear Weapons.”

ST: ”That was something wasn’t it! Your cabinet decision was that the Netherlands wouldn’t send anybody to the negotiations, but in the end they did participate, because you people worked so hard, so effectively.”

SS: ”But, Setsuko, you are a part of our story in that way. You sent such clear messages. We put those words in front of the parliament and they couldn’t look away. They had to say, this is what we need to do.’‘

”We are at a new phase in our campaign here now. You have been all over the world, you have talked to so many people. Do you have any advice for us in taking this forward?”

ST: ”Actually, we learned from you, you fought so hard. I think that’s a success story. You managed to get the parliament to decide to send somebody from the Netherlands to the negotiations. I think that’s a beautiful story. I think that’s it, the persistent effort. I think that’s the way you have been working and that’s what we need right now. Do you feel confident? Maybe you do, but I don’t feel confident in Canada. Everybody is working towards the same goal, we need to work together much more.”

SS: ”I think those are really wise words. Working together is how we get there. We are strong when we are together. I wonder, and I hope that this is okay to ask, when it comes to the 6th of August this years, what will you be doing?”

ST: ”There will be a nationwide event in Canada, with participation from coast to coast. And we have our own Toronto based Hiroshima Nagasaki coalition. Actually those are the two that I can handle that day. On top of that there is the ICAN letters writing campaign, there is our own letter writing campaign to our own Prime Minister about Canada’s involvement within the Manhattan Project. That’s taking a lot of energy. I also wrote a letter to the Prime Minster of Japan – Mister Abe. We wrote a pretty direct letter and both a Hiroshima based paper and Asahi [one of the largest national newspapers in Japan] printed my letter to the Prime Minster of Japan. So that’s good!”

SS: ”I want to let you know that we’re following up the letter that you wrote to our Prime Minster – to Minster Rutte – with another letter. And we will also organize actions and events to commemorate Hiroshima across the country on 6 August. There will be events in 10 towns and cities, all taking the social distancing rules into account. But we have a very specific call, we want our Prime Minster to go on the record and to say publicly: ‘’We remember what happened, we honor those whose lives been lost, we honor those who lived through it and we pledge never again’’.”

ST: ”Oh, that’s amazing! Well, thank you. That’s great effort. And congratulations on your work, the divestment project. People really appreciate that around the world. And I am glad that Canada is finally initiating that.”