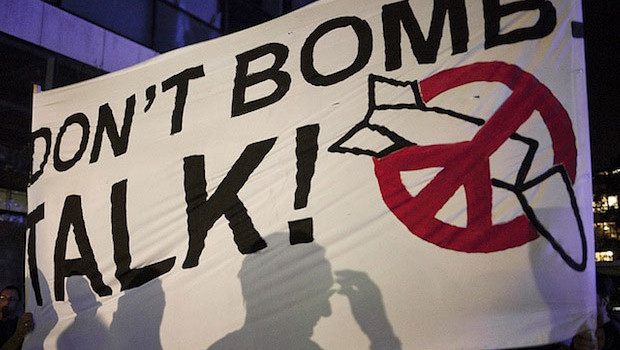 Israelis demonstrate against a war with Iran

Recently, Israel is feeling more uncomfortable in its neighbourhood than usual. Trying to come to terms with a changed region as a result of the ‘Arab Spring’, Israel fears its security is at risk. In addition the concerns about Iran’s nuclear ambition keep growing. With the Iranian uranium enrichment continuing, Israel fears that Iran is close to having the ability to build a bomb. In response, Israeli defence minister Ehud Barak and Prime Minister Benjamin Netanyahu have made it clear that war with Iran is at its doorstep, which has prompted concern that Israel might resort to unilaterally attacking Iran.

The image presented by the Israeli government is that of two options: either bomb Iran or accept Iran with the bomb. By painting such a black and white picture , the government hopes to gain public support for a military strike. Believing that there are alternative ways to thwart the crisis, such as the planned Helsinki Talks (on the possibility of creating a zone free of weapons of mass destruction in the Middle East), the Israeli disarmament movement organized a demonstration in front of the ministry of defence and military headquarters in the heart of Tel Aviv on 23 August. Three hundred people stood there and raised their voices against war with Iran.

This however is certainly not the first time that citizens have voiced their opposition to war with Iran. A number of actions have taken place in the last year. Five months ago there was an art exhibition in Tel Aviv named “Iran” which aimed to avert war and send a friendly message to Tehran through a series of photograph and sculpture exhibitions and video presentations, including a statue of Ehud Barak entitled “The most dangerous man in the world 2012”. Also, Israeli citizens have started posting Facebook messages saying “Iranians we love you”, which remarkably have been responded to by Iranian citizens saying “Israelis we love you”.
Still taking place on a daily basis, and now also in front of Israeli Defence Minister Ehud Barak’s home in Tel Aviv, the demonstrations have lead to new support for the Israeli disarmament movement. Moreover, the demonstrations and media coverage show, that despite the unprecedented campaign by the Israeli government to gain support for going to war, many Israelis in fact oppose a war.

The deal is dead, long live the deal! →