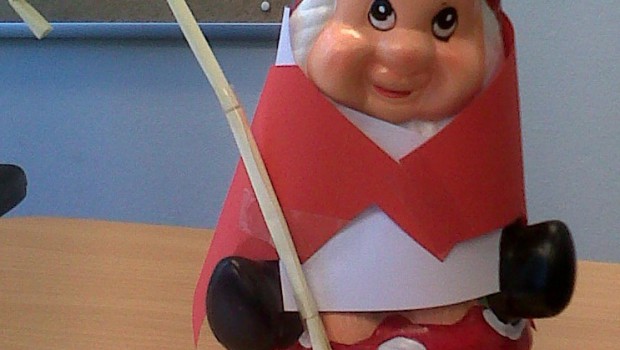 As an American ex-pat living in the Netherlands there are a number of interesting customs and practices to get used to. The Dutch are very direct people, and not shy about asking quite personal questions- an easy thing for someone who grew up in New York City (once New Amsterdam!) to deal with. The Dutch ride bicycles, and can balance three children, two bags of groceries and a crate of beer on two wheels- I personally can’t do that, but I watch it happen with admiration. Then there is the practice of Sinterklaas.

For those of you who don’t know, St. Nicholas is the patron saint of children, sailors and the City of Amsterdam (among other things). St. Nicholas day is the 6th of December, but in the Netherlands Sinterklaasavond is celebrated on the 5th, and is the traditional gift giving time during winter and Christmas holidays, and are accompanied by a poem.

Inspired by our office blog-gnome, dressed today as Sinterklaas (see picture), I want to share my own Sinterklaas poem.

A world free of nukes in sight
A basic, simple human right

Countries begin to negotiate a ban
We’ll push for it! It’s the plan!

Will Obama earn his Nobel Prize?
Abolishing nuclear weapons before our eyes?

When Sinterklaas comes around next year
Will nuclear weapons still be here?