More financial institutions than ever are refusing to finance the nuclear weapons industry. And they are not alone: the movement rejecting the legitimacy of nuclear weapons continues to grow. In 2017, states from around the world voted to adopt the Treaty on the Prohibition of Nuclear Weapons; a comprehensive prohibition on the most destructive weapons ever created. As more and more states sign and ratify this Treaty moving it closer to entry into force, it becomes increasingly clear that nuclear weapons are not a part of the security system of the future. 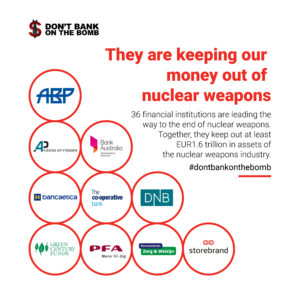 Financial institutions can use their position in the global economy to contribute to nuclear disarmament. Enacting comprehensive policies on nuclear weapons provides an incentive to end production of materials designed to commit mass murder. This contributes to the stigma on nuclear weapons. Refusing to invest in companies that produce nuclear weapons is also an accurate reflection of public opinion, as most recent polls show a clear rejection of nuclear weapons.

Excluding companies involved in the production of controversial weapons, including nuclear weapons but also other inhumane and illegal weapons such as cluster munitions, landmines and chemical weapons, is the new normal. The number of financial institutions with (comprehensive) policies listed in Don’t Bank on the Bomb reports has grown from 35 in 2014 to 77 in this report. And this is only the tip of the iceberg.

36 institutions have in place comprehensive policies, an increase of 13 compared to the 23 listed in the previous report. These are listed in the Hall of Fame. Their policies are best-practice and an example to the rest of the financial sector. The report also profiles 41 financial institutions, compared to the 40 listed previously, whose policies are not yet comprehensive enough and may still have investments in nuclear weapons producers. They are listed in the Runners-Up section because by adopting a policy restricting investments in nuclear weapons, they demonstrate a shared understanding that nuclear weapons are controversial .